Cal Kestis is the main protagonist of Star Wars Jedi: Fallen Order. Trained as a Jedi Padawan by Jaro Tapal, prior to the events of Star Wars Episode III: Revenge of the Sith, in the Jedi Temple on Coruscant.

Cal Kestis is a member of the Scrapper Guild located on Bracca, where he works as a rigger -- a specialization in the guild that involves setting up demolition and salvage equipment. The work is dangerous and physically demanding; riggers are agile, expert climbers without exception. Quiet and hard-working, Cal is well-liked in the guild but generally keeps to himself. The only real friend he has is Prauf, an older Abednedo.

Cal Kestis was originally a Jedi Padawan studying to become a future Jedi Knight at the Jedi Temple on the core world of Coruscant during the era of the Galactic Republic under the training of Jaro Tapal on a Republic Cruiser over Bracca. He escaped the Jedi Purge when the Jedi were betrayed by one of their own, Anakin Skywalker now called Darth Vader, and the Supreme Chancellor Palpatine who in secret was the powerful Sith Lord Darth Sidious.

After escaping with his life he went into hiding, posing as a normal worker for the Scrapper Guild. He continued to live his life there for many years, until he revealed himself to the Galactic Empire, who were trying to find a force user in hiding, and exterminate them, killing his best friend, Prauf, in the process. While trying to escape the Empire, Cal was caught in a duel with the sinister Second Sister. He barely escaped, being rescued by Cere Junda, and Greez Dritus. Cere's mission was to rebuild the fallen jedi order, in which Cal decided was his best bet to join in on.

The crew first traveled to Bogano, attempting to learn the secrets of the Vault, an ancient structure built by the Zeffo. They discovered, from the encrypted files of Eno Cordova, that somewhere, there was a Jedi holocron, and that they must travel to Zeffo, into the eye of the storm, and search for an ancient tomb to learn about the force, known by the Zeffo as "The Life Wind."

On Zeffo, Cal found his way down to the Tomb of Eilram, where he discovered another encrypted log upon encountering a wall covered in carving of Wroshyyyr bark. Cal then travels to Kashyyyk, to seek out Tarfful, a friend of Cordova who may know information of the holocron.

Cal, unable to find Tarfull, meets and assists Saw Gerrera and the partisans with their fight for freedom of Kashyyyk against the Empire. Cal helps them by taking down stormtroopers, scout troopers, purge troopers, flame troopers, and even an AT-ST.

Cal left to Zeffo without meeting Tarfful in hopes of finding another tomb which may reveal information about Cordova's journey. He eventually finds himself at a Venator wreck, where he encounters many enemies that he must fight off. Continuing to the follow the path, he ends up in an Imperial Dig Site, where he fights the Second Sister, narrowly escaping, thanks to BD-1. There, he learns that the Second Sister is actually Trilla Sudari, the padawan of Cere Junda. Then, closer to the Tomb of Miktrull, he continues forward.

He enters the tomb, which is not yet occupied by the Empire. While within the tomb, he eventually recalls learnings from his past, and remembers how to pull objects with the force. He uses this new ability to Raise the Spire of Miktrull, and make his way out, uncovering yet another encrypted log explaining that Cal will need an Astrium to unlock the ancient vault.

He then begins to travel back to the Mantis, only to run into some bounty hunters known as the Haxion Brood. He get captured and brought to the lair of this affiliation, an colonized asteroid known as Ordo Eris. He is eventually brought into an arena, where he slays a member of the Haxion Brood and is rescued by his friends.

Then, the crew returns to Kashyyyk with hopes of learning more information on the Astrium. He begins his trek up the origin tree, running into many sites occupied by the Empire. He enters the Shadowlands, meeting Tarfful and Mari Kosan, who gives Cal a water breather. Then Cal, after some time of climbing the tree, discovers another encrypted log, stating that the Astrium can be found on Dathomir. Before leaving Kashyyyk, though, Cal runs into the Ninth Sister, and they fight atop the Origin Tree. Cal emerges victorious, slicing off the Ninth Sister's hand and throwing her off the edge.

Next, Cal travels to Dathomir, and approaches the ancient which will hold the Astrium, despite the warnings of a mysterious traveler. While searching for a way to get in, a nightbrother throws a rock down at Cal, breaking the wooden floor beneath him, sending him down to the dark depths of Dathomir. From there, he runs into Gorgara, a female chirodactyl that terrorizes the civilization on Dathomir. Cal ends up killing the beast, and is able to get his hands on gear that makes it much easier to climb.

After traveling through a large Dathomirian village, Cal finds his way back to the ruins. From there, he climbs up a wall and travels inside. While inside, he gets a vision of Order 66, reliving the events of the clones' betrayal and his master's death. He then finds himself in a separate vision, where his master, Jaro Tapal, breaks his lightsaber, his only weapon.

Upon leaving, he discovers that the mysterious wanderer was actually a former Jedi general named Taron Malicos, who learned the magick of the nightsisters. Nightsister Merrin awakens her undead sisters and forces Cal to only be able to run away, back to his ship.

While back on the Mantis, Cere decides that it is time for Cal to get a new lightsaber, so they travel to the ice planet Ilum, in search of a kyber crystal. Following the call of the crystal, Cal encounters a Probe Droid, which he destroys, but seemingly is able to transmit information about the Jedi's arrival before shutting down.

With the help of a vision of his younger self, Cal finds his crystal, but it breaks apart in his hand. However, he is inspired by BD-1 to use it nonetheless, forging two separate sabers which can combine into one, double-bladed saber. Returning to the Mantis, Cal must fight his way through imperial forces, including two AT-STs.

Armed with a new saber, Cal returns to Dathomir, but is confronted by Nightsister Merrin inside the Nightmare Ruins. He explains the Jedi philosophy to her, and she aids him in his subsequent battle against former Jedi Taron Malicos, who has lost faith in the order and refuses to see it restored.

Upon defeating Malicos, Cal claims the Zeffo Astrium in the Tomb of Kujet, and Merrin decides that she will join Cal on his journey. She also reveals that Malicos sent her to kill Greez and Cere, but she could not see that they were a threat. The crew returns to Bogano, where Cal uses the Astrium to gain access to the vault. He is met with a force vision of his potential future as an inquisitor, and meets a Zeffo Sage who explains that he led his people into the unknown (likely the Unknown Regions) to start anew, away from the power of the dark side.

Cal's vision ends, and he finds Trilla behind him. They fight for the holocron, and despite winning the duel, Cal is paralyzed by the painful memories associated with Trilla's lightsaber when he picks it up. Trilla escapes with the holocron.

Cal returns to the Mantis, and they set a course for Nur, an unconfirmed moon of Mustafar where the Fortress Inquisitorius is located. Cere knights Cal and reconnects to the Force before they go together into the Fortress, flooding a part of it and confronting Trilla. Cal again defeats Trilla in combat, giving Cere the opportunity to sway her former padawan's allegiances. However, Darth Vader arrives and kills Trilla, also casting Cere aside. Cal runs from Vader, but is cut off by the Sith Lord in a corridor. Cere, Cal and BD-1 work together to distract Vader for long enough that they can escape, and are rescued by Merrin.

Once back on the Mantis, the crew discuss that any children trained in the ways of the Force will become targets for the Inquisitorius. Cal destroys the holocron, and contemplates where his journey with his new family will lead him next. 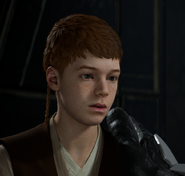 Cal’s dream of being an Inquisitor.