"You would be wise to surrender." ― Darth Vader to Cal Kestis

Darth Vader is a character and the final antagonist of Star Wars Jedi: Fallen Order.

Encountered during the final mission of Fallen Order, Vader is the final boss faced by Cal Kestis, though his boss fight differs significantly in that it heavily relies upon quick-time events. Invincible and able to block any and all attacks thrown at him, the player must alternate between running away and following the quick-time events to avoid a game over.

Vader is encountered during the final mission of Fallen Order, coming across Cal Kestis and Cere Junda shortly after the former defeats Trilla Suduri in battle. Displeased with her failure to eliminate Kestis as a threat, Vader executes Trilla, enraging Cere. The Jedi Master charges at Vader, who effortlessly tosses over the nearby railing and to her apparent doom in a lava-filled chasm. After agreeing with Vader's suggestion that he would be wise to surrender, Cal engages Vader in a fight - one that the Jedi is hopelessly outmatched in.

With all of his attacks effortlessly blocked by Vader, Cal opts to cut his losses and run, with Vader tearing apart the floor he is running on. He narrowly manages to reach an elevator and gets to the upper floors, though Vader ambushes Cal as he opens up the underwater entrance to the Inquisitors' base. Though Cal manages to stab him in the side thanks to a distraction from BD-1, Vader impales Cal with his own lightsaber and nearly kills him before Cere - having survived her apparent demise - intervenes. This gives Cal enough time to break open a nearby window, causing a massive torrent of water to flow into the hallway, forcing Vader to focus on driving the water back and allowing Cal to escape with BD-1 and Cere.

Few survive an encounter with the most powerful Sith in the Galaxy.

Escape is the only chance of survival.

Darth Vader, the sinister dark lord of the Sith, is a mysterious figure amongst the Empire. Encounters with this machine-like man are rare, and mostly deadly. Trained in the dark side of the Force, Vader governs over the Inquisitorius. 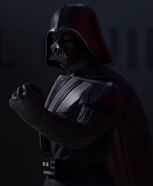 Darth Vader (as seen in the Tactical Guide)

Vader force choking Cal, after the first attempt to run or attack the Sith