Ilum is a snow-covered planet located in the Unknown Regions.

Ilum was the site of an ancient Jedi temple that guarded the entrance to a cave system rich in minerals, including kyber crystals. During the time of the Galactic Republic, the Ilum temple was host to a ritual where a Jedi (usually of the rank of master) would bring groups of younglings to the planet to harvest kyber crystals for their lightsabers.

During the time of the Galactic Empire, Ilum was harvested for it's kyber crystals on a far larger scale to provide enough crystal for the Empire's immense super weapons known as Death Stars. In approximately 14 BBY the Jedi Cal Kestis visited the planet to find a kyber crystal for his lightsaber.

During the time of the New Republic, Ilum was terraformed by the First Order as part of a transformation into Starkiller base, a new breed of super weapon that utilised the plasma from stars. The core of the planet was hollowed out to serve as a container for the weapon's fuel and the immense trench that spanned the circumference of the planet became the location of the weapon itself. In 34 ABY the weapon was used to destroy the Hosnian system but the entire planet was quickly blown up by resistance X-wings in a retaliatory attack, the contents of the core destroying the planet after the system had been damaged by a bombing run.

llum is the Planet with most Saber Crystals.

For Ilum databanks, head to: 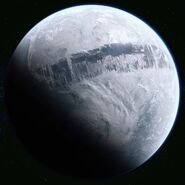 Add a photo to this gallery

Retrieved from "https://starwarsjedifallenorder.fandom.com/wiki/Ilum?oldid=4138"
Community content is available under CC-BY-SA unless otherwise noted.