Edit
watch 01:36
We're Getting Mutants in the MCU - The Loop
Do you like this video?
Play Sound

May attack efficiently in large numbers.

A lightsaber will reflect shots back at them.

If close enough, they will use melee attack.

Imperial Stormtroopers are the frontline soldiers of the Galactic Empire. Conscripted from worlds across the galaxy, they have been trained to support the might of the Imperial war machine and identify threats indiscriminately. Armed with a variety of weapons, including long range blaster rifles, they are most efficient in large numbers where they may prove overwhelming.

Stormtroopers wear standard white plastoid Stormtrooper armor over a black body glove suit, they have an E-11 holster on their right side.

Stormtroopers appear on all Imperial controlled planets, except Ilum where Snowtroopers appear instead. After the Second Sister is fought on Bogano they begin spawning there.

Stormtroopers use E-11 Blaster Rifles to shoot targets at long range, they shots they fire can be deflected, when in close range they will bash the target with their guns. Stormtroopers dont always use E-11s though, they may use Clone Wars era weapons such as the DC-15A or DC-15 blaster rifle. Stormtroopers are commanded by Stormtrooper Commanders and will often support Scout Troopers and Purge Troopers from long range.

Stormtrooper are often deployed by LAAT/LE Gunships and seen inside AT-ATs.

Stormtroopers are easy to kill. they can be killed with one slash of the lightsaber and have no blocking stamina. They are also vulnerable to reflected blaster fire, requiring only two hits to kill. their melee strikes can also be parried.

A Stormtrooper on Bracca

Two Stormtroopers firing from a train 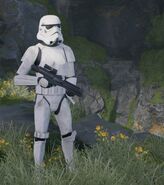 A Stormtrooper on Zeffo

Scazz fighting over a dead Stormtrooper

A Stormtrooper looking out the rear turret of an AT-AT

A Gunship carrying a squad of Stormtroopers 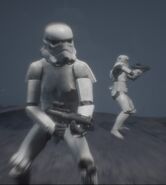 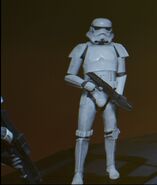 Stormtrooper inside the Fortress Inquisitorius

A group of drowned Stormtroopers